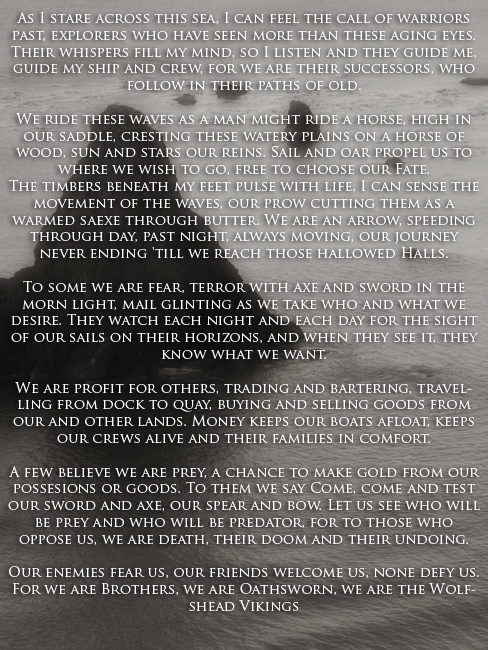 Built specifically for Mortal Online, the Wolfshead Vikings are designed to be a Kallard only (more or less) Roleplaying & player vs. player combat guild. Taking elements & inspiration from both Danish Vikings of 700-1100AD and the 'popular culture' view (no horned helms mind!), we intend to forge this guild into both an active RP & combat guild, potentially with a crafting/trading element.

As was said, we are a Roleplaying guild and will maintain a strict set of Roleplaying rules for our Vikings to follow, to increase both immersion and the quality of our RP as a guild. Potentially we may look into a 'Vent' server to increase capability of communication of OOC matters, and co-ordination in combat.

The Wolfshead Vikings maintain a strict hierarchy, with each member fully aware of his place, socially and militarily.

The Jarl is a person of high rank in some parts of Kallard society, and in others it is one of the highest ranks, often trusted advisors of Kings. They lead armies, own land, solve legal disputes, supervise collection of taxes, and generally rule in the absence of higher authority. The Jarl-Vik is generally a lesser Jarl who engages in piracy, trading and/or exploration. They outfit their vessels with crew, goods and/or weapons & armour, and indulge in their whim, whether it is to bring fine luxuries from the Tindremene empire, or to raid settlements on the coast. The bravest venture on long voyages, guided by moon, sun and stars, searching for new land that could be settled upon.

When their vessel is at sea, the Jarl-Vik is akin to a King. He rules his ship how he see's fit, and sails to where he wishes.

No Kallard would put a ship to sea for a voyage without a Sailing Master. Known under various names and titles, Sailing Masters instinctively know routes and coastlines, can forecast the weather, know every detail of their vessel and can get the best speed from them. They can navigate using the position of the sun and stars, rarely needing charts, and are experts at repairing/keeping the ship seaworthy. A heavy burden rests on their shoulders, for it is their responsibility to make sure the ship reaches its destination.

Huscarls are the chosen warriors of a Jarl, and vary in equipment & its quality from one Jarl to the next. Those who serve the richer Jarls often have brass or gold rings interlinked in their mail armour, to form patterns or runes, or may have brass runes inlaid into their helms. Their weapons and armour are always in the best of conditions, and is always the best their community can equip them with, as they earn far more than an average farmhand could expect to earn in his lifetime.

On the battlefield they form the core of the Jarls army/raiding party. They act as junior officers, leading in the Jarls stead, and whilst comments about their pay and 'luxury' are rarely positive, their renown and fame for strength, discipline and unity on the battlefield leave most Kallards in awe of these powerful warriors.

The crew of a Kallard Longship are a mixed group, being of varying human races, mostly young men seeking fame, glory and wealth, or older veterans looking to enrich themselves. They form the bulk of the ships compliment and of the Jarl's raiding parties, being capable fighters and seamen, able to turn their hands to any task required, from carpentry (repairing the ship) to blacksmithing (repairing weapons/armour & fashioning new equipment) and even masonry & building. Most crews are bound by an Oath to each other, and whilst the Oath will vary from crew to crew, it will always serve to unite the membersof the various races who serve on the Longships.

The worst fate any Kallard can suffer is to be branded as an Oathbreaker. Any man or woman who breaks a freely given Oath is cast out of Kallard society, forced to fend for themselves. They often recieve nothing but scorn and contempt, but to a Kallard this is acceptable. How can you trust a man or woman who betrays their fellows and their word? Some Oathbroken are killed, others isolated from their society by imprisonment. Others are turfed from their village/town, are branded with a hot iron on their forehead as a warning to other Kallard societies that the person is an Oathbreaker. Those who escape to other lands either thrive or die. Some are enslaved, or sold by their community into slavery, others manage to be come rich, a few richer than they could ever dream of in their old community.

A Jarl would only ever recruit a Oathbroken if they were the only choice, even Sidoian & Sarducaan are preferred over an Oathbreaker.

The Patron God of the Wolfshead Vikings is Arngrim, but he is just one of their many Gods, each steeped in their own tales and history, which entwines and snares around each deity. This Pantheon is currently under construction, and will be added to soon.

Under construction as of the moment

Each recruit to either the Wolfshead or Crest-Breaker crews must swear an Oath of fealty to their fellow Vikings, their officers and their God(s).

These Oaths will be added soon.

Recruitment is currently being handled entirely on our site/forum, but once Mortal Online is released, it will be a 50/50 split between application on the forum & in-game recruitment - forum to view the general character of the person & their avatar's backstory, in-game to make sure the candidate will be suitable for the guild and that we will be a suitable group for them to join.

Applicants will, once the game is released, be recruited into the guild on a trial basis; once that period is up (yet to be decided between myself and co-creator Heldrik) the applicant will either be accepted or removed from the guild (though we expect that will be a very rare move).

Retrieved from "https://mowiki.fandom.com/wiki/Wolfshead_Vikings?oldid=4881"
Community content is available under CC-BY-SA unless otherwise noted.